Deprecated: Function Elementor\Widgets_Manager::register_widget_type is deprecated since version 3.5.0! Use register instead. in /home/hemoptic/tuesdaywithterry/wp-includes/functions.php on line 5383

Putting In The Work 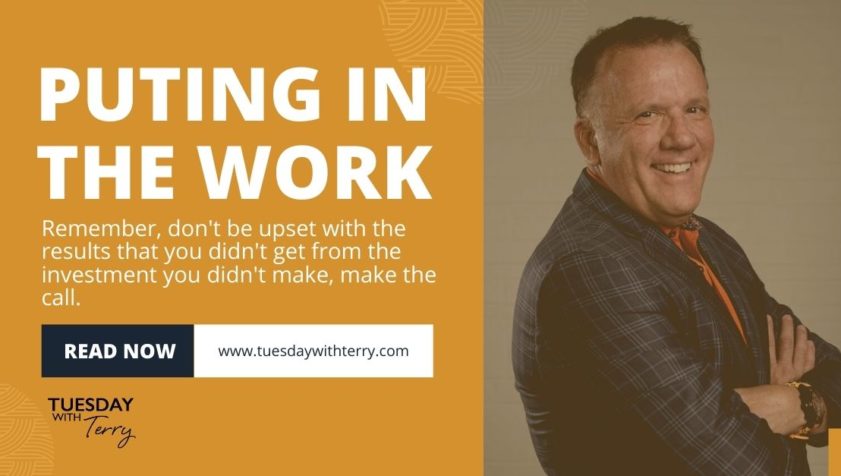 Today I’d like to talk to you a little bit about putting in the effort and I have a quote. “Don’t be upset with the results you didn’t get from the investment that you didn’t make.”

And I say this about exercise and working out. Nobody can do your pushups for you. If you want to get stronger in the upper body and your personal trainer or your coach at Orangetheory tells you, you need to do some pushups or you need to do some burpees. You gotta do them. You kind of have to do them for yourself, right? You can’t let other people do your pushups. And then you expect to get the results. Don’t be upset with the results you didn’t get. From the investment that you didn’t make. And I’m serious about that.

We wished that we opened up our business and everybody would come flooding in with their checkbooks and say, man, we’re excited. We want to join Orangetheory. We want to join. But the reality is it doesn’t work that way. We have to become master inviters that means we invite, invite, invite a lot of people to get some of them to show up.

Imagine you are having a party at your house, you want to have 15, 20 people over at your house. If you invited 15 or 20 people and they all aren’t going to show up, something always happens, right? Isn’t it true? That things come up in our lives that take us away could be an emergency, could be a family situation, could be health. Happens all the time. I’m about to jump on a plane and head out to Arizona. My flight might be delayed. I might not be able to get where I want to go at a certain time, but you have to invite more people than you expect. If you want X number of appointments or speak in front of X number of people. If you’re going to be great at appointment setting, you’ve got to become a master inviter.

So you say, well, Terry, that’s great. I want to do my pushups. I want to get stronger. I want to do better at setting appointments. Then if that’s the case, then what do you have to do you see? There’s only a couple of reasons why people don’t set appointments. The number one reason is they don’t have anybody to call or they don’t have anybody to reach out to. The second reason is they have a list or a group of people to call, but they just don’t know what to say. And the third reason that people don’t do it is because they’re afraid of rejection.

They don’t invite you. They don’t talk to people because you are done. No, what they’re going to say, and you’re afraid they’re gonna say no and poor little me. If they say no. Right? All man, my feelings got hurt. I’m embarrassed. Oh my gosh, what would happen? Oh, you hurt my pride. You don’t like my business. How could anybody not like my business?

Well, I got to tell you something about the Orangetheory. Fitness is not for everybody. I’m gonna tell you a true story. So when people say, no, I simply say no problem. And I move on and I start talking to the next person and I talk to the next person. A lot of times my salespeople will say, man, I tried asking and inviting and it just simply didn’t work. And I say, how many people did you ask? They said, well, I talked to 10 people today. That’s simply not enough people. You gotta get out there and talk to a lot of people and you’re probably going to get a lot of.

What I tell my guys and ladies to do is I say, go out and get 10 nos because when they’re looking for the, no, they’re expecting it when they’re looking for the yes. And they get a no, they get rejected. They’re not expecting it to be a surprise to them. Oh my gosh. And they, it brings them around down. So I teach them and train them and show them how to go get a, no, go get me 10 nos. The glass is either half full or it’s half empty. Uh, all I’m suggesting is you get what you’re looking for. Look for the nos, you’ll get the yeses and people will be excited that they got them.

My recommendation is you get out there 72 hours and beyond to set appointments. Nobody sets appointments the day of. People don’t do that because they’re already booked today and they’re already booked tomorrow. In many cases, they’re booked this week. So you’ve got to be looking 72 hours and beyond for people to prepare to people, to plan. And that’s when you can get people to fit it in your schedule. Stop thinking about getting today and start working on three days from now, four days from now and getting ahead.

I’ll tell you what else we know about inviting. It takes eight to twelve times to get a customer’s attention. You call them once they don’t answer their phone. I don’t know about you, but I don’t answer my phone. I see a unknown number on my phone, I don’t pick that thing up. And then the same numbers a little later that day. Why they keep calling me? I thought maybe it’s a robo call or something. And then the next day maybe I get a phone call and that’s the third time. Finally, after they call me three, maybe four times, I will probably pick it up. Cause I go, who keeps who’s really somebody trying to get ahold of me. It takes two or three, four calls just to get my attention.

That’s the same thing as setting appointments. If you’re trying to set appointments, it takes two or three, four calls to get people’s attention. Then when you get them on the phone or through an email or through a text, you now can have a conversation with them. And the first time they hear about something, they’re probably gonna blow you off a little bit. They’re gonna say, Hey, I want you to send me some information about that and let me get back with you. That’s a push off. That’s a blow off. Stay focused on what you’re trying to accomplish.

When people say, send me over something or maybe I’ll stop in next week. Normally what I do is I say, are you currently working out? And they’ll say, yes, I say, what time of the day do you normally work out, mornings, afternoons, or evenings? If I can find out what their current habits are, then I can add my program into the mix and invite them to work out like they normally do. But this time it’s not at their club or gym, it’s at mine.

Many times people procrastinate. They hold off. Why? Because they’re afraid of making the wrong decision. So they might have all the information and all they really need to know, and just a nice little gentle nudge. And you can do that through a text, an email, or a phone call. If you are a manager, if you’re a director, I often tell my managers, my directors, my VPs, you’ve got to lead by example. You’ve got to lead from the front. If you just tell people what to do many times they won’t. So if you go out and you show them that it can be done, and they will do it.

Now I want to share with you something that’s important when you’re on the telephone. You can’t do this with an email and you can’t do this with text, but you can do it when you’re on the telephone and I’m using it right now. It’s called the power of my voice. This is your instrument. Your instrument is your voice, the power of your voice. And I got to tell you, you cannot start a major forest fire with a wet match.

You see, if I just talked monotone and didn’t raise my voice and ask you if you were interested, how interested would you be? You wouldn’t be very interested. What you’ve got to do is use the power of your voice.

And there’s a couple of things I want to bring out to you and you can go. I just found ’em actually online. I found a place where I could go take voice lessons and I practice in the car. When I was early on in my sales career, I would practice in the car, um, the power of my voice. And I use this phrase, I said he did not steal. Now, depending on where you put your voice inflection, you can make that phrase say many different things.

You see, you have the power of your voice and the power of your instrument. If you’re on the telephone and you’re trying to get people excited, you should speed up and speak a little bit more with urgency. If you’re talking about prices and it’s sensitive, you should slow down and use the lower tones of your voice. What I’m saying is you’ve got to use your instrument.

Those are just a couple of tips on how to get better at setting appointments. Remember, don’t be upset with the results that you didn’t get from the investment you didn’t make, make the call. Don’t be afraid of rejection. Get a good list, make sure you have your leads. Make sure you have a script and you know what to say and how to say it.