How to Create a Life Full of World-class Events 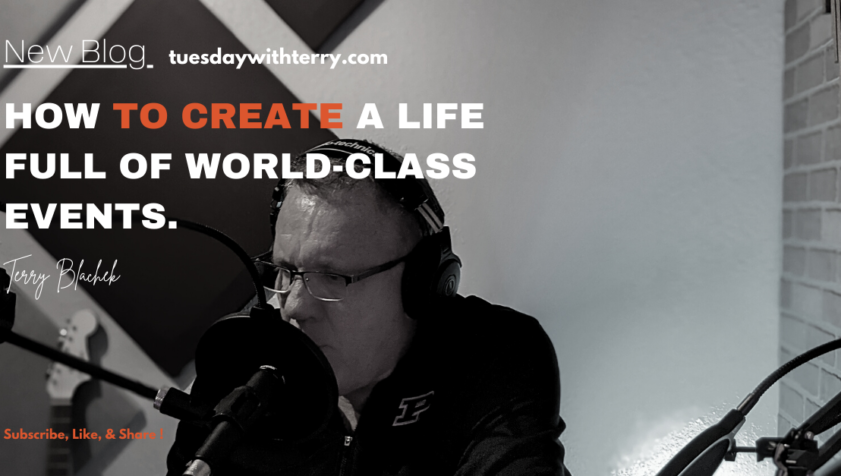 Have you ever been to a world class-event?

A while ago, someone told me that there were three world-class events one absolutely must go to.

No. 1 is the Super Bowl. In fact, I’ve been lucky enough to actually attend two Super Bowls myself. The most recent one was last year – go Buccs! – and man, what an incredible turnaround story that was.

The second is the Kentucky Derby. The amount of energy in the stands when the horses round that third turn, the way everyone sits on the edges of their seats and calls out, cheering for their favorite steed, listening to the pounding of their hooves as they cross the finish line – it’s called “The Best 2 Minutes of Sports” for a reason.

The final event is the Indianapolis 500. There’s nothing better than hearing, “Gentlemen, start your engines,” over the loudspeaker. When I attended, I was given the opportunity to sit on the infield right in front of the pits, watching them swap tires faster than the speed of light. I was also given a pair of headphones that I could use to listen to the interactions of the drivers and their pit crew. Exciting stuff.

But you know what’s equally exciting as any one of those events? Your life.

Your mind is the best computer the world has ever seen. Your body has electrical systems, warning signals, and conveyor belts that run through it. Who knows what kind of magic you’ll experience when the mind and body work together.

So, in the midst of all this magic, do you view your life as an adventure? Do you live it in such a way that it feels like an epic event?

It doesn’t have to be big. Maybe you wear different clothes or take the long way home from work. If you’ve been listening to the same old radio stations for years, maybe you re-tune your radio and listen to a different genre of music. Maybe you want to go feed the birds on your lunch break, or give blood, or call your mom. Maybe you want to write a love letter or try a new fruit or vegetable. Maybe you want to watch less TV and spend more quality time with your kids.

But the real question you need to ask yourself is, “What kind of adventures do I have planned for myself this year?” I want to share a list of a few things you can do to spark your sense of spontaneity.

Have you ever thought about the seven wonders of the world? How about Mount Everest, the Great Barrier Reef, the Grand Canyon, or Victoria Falls? Ever been to the Empire State Building or the Panama Canal? Or the cruises to Alaska where you watch ice shelves crash and fall into the sea? Have you thought about taking a road trip to every state in the U.S.? Have you seen Niagara Falls? Big Ben? The Eiffel Tower, Mount Rushmore, the Hoover Dam?

All I’m suggesting is that if you have an adventure you want to take, you shouldn’t keep putting it off. Write it down and make a plan of action. Don’t waste time looking back on your life saying, “Man, I wish I would have done this. I wish I got to see that.” Don’t wish your life away. Just do it. Go out and live your life to the fullest.

You might be saying, “Terry, you’re crazy. Doing these things is crazy.”

Well, your dreams are never too crazy.

In 2005, a couple buddies were playing around with videos and talking to each other, saying, “You know, I wonder if there’s a way we could take these videos and share them with our friends. Anybody on any browser could open it up and give it a watch.”

It’s a simple idea, really, but back then, people thought they were absolutely insane. Nobody had ever done anything like this before, and many thought they would fail. But they put their heads together and made it all happen. One year later, Google bought their company, YouTube, for $1.6 billion.

This “crazy idea” was the invention of the year in 2005. So, what’s your YouTube? What’s the dream, the goal, the crazy idea you have?

What I’d like you to do is take out a piece of paper and spend some time writing it down. As a matter of fact, if you did this every week, you’d end up with 52 crazy ideas. And who knows – maybe one or two of them will turn out to be a billion-dollar idea.

All I’m suggesting is that all too often, we limit ourselves. So take your crazy ideas, write them down, and follow through with them. Become an adventurer. Take the trip of a lifetime. Rip your blinders off.

And what you’ll find at the end of that year is that you’re looking back on all you’ve accomplished, saying, “Man. My life really is a world-class event.”

If you’re looking for more advice on how to live the life of your dreams, be sure to tune into my podcast that airs every Tuesday.