Deprecated: Function Elementor\Widgets_Manager::register_widget_type is deprecated since version 3.5.0! Use register instead. in /home/hemoptic/tuesdaywithterry/wp-includes/functions.php on line 5383

Tips for Living the Life of Your Dreams 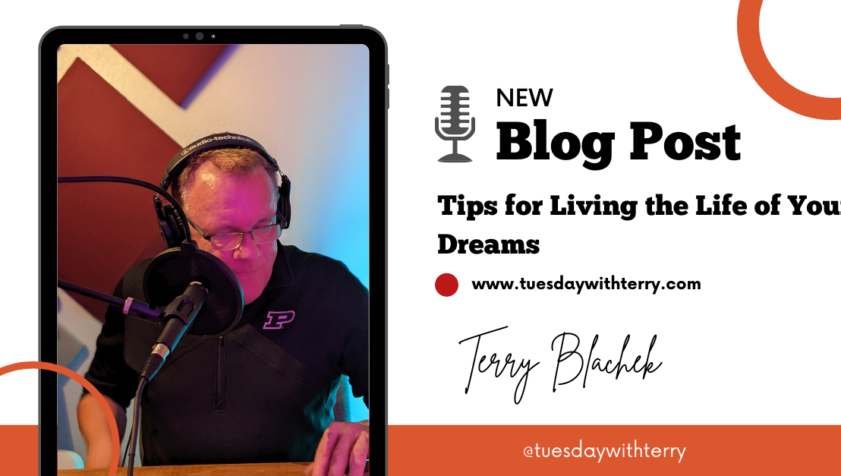 When I was a kid, I used to take a towel, tie it around my neck like a cape, and run around my house with my little brother like we were superheroes.

Maybe you pretended to be an astronaut, a doctor, or an actor. Whatever the case, it seems like we’ve always had dreams about our lives and who we want to become. But all too often, we don’t do what we need to do to turn them into a reality.

When my daughter was younger, she first wanted to be a teacher. It later changed to doctor, then scientist, then veterinarian. And sure enough, today, she is a veterinarian.

“Do you realize that you’ve had this dream all throughout middle and high school and now you’re actually living it?” I once said to her. “It’s not just something out there that you’re hoping will happen someday. You’re really out there living your dream.”

How cool is that? The ability to think about things, turn ideas into actions, and actually live out our dreams. We all have that ability, even if we don’t realize it – and it all starts with identifying concrete goals and putting your pen to paper.

Once upon a time, there was a study conducted at Yale University. What they found was that only 3 percent of the graduating class had written down their goals, predetermined and predefined. After about 20 years, they checked back in with the entire class, and found that the 3 percent that had actually taken the time to write down their goals had accomplished more financially than the remaining 97 percent who did not.

I know you’ve heard me say this before, but I cannot stress the importance of writing down your goals, dreams, and desires. If you don’t write these things down, they’ll remain intangible.

A great exercise I do with my staff that you might consider trying for yourself is that I have them write down where they want to be a year from now and some of the goals and desires they’d like to see come to fruition. Then, they seal it all up in an envelope and give it to me. A year later, I give them the envelope back, they open it up, and they see how far they’ve come – or at the very least, can begin to identify what they’ll need to do in order to get themselves where they want to go.

Do you recall the circle of life exercise we talked about in my first podcast? It’s a great way to get started on creating multi-dimensional goals. So when you start making goals for yourself over this next year, make sure to look at yourself as a whole person – not just one facet.

Remember: You cannot hit a target you cannot see. You need to be detailed and specific and identify exactly where the target is and which angle you’re going to take to hit it right in the bullseye.

When you walk into a restaurant, you don’t just say, “I want to be served some food.” You specifically order a burger, steak, or salad – you define what you want.

So when thinking about your goals, don’t just say, “I want to be a millionaire,” or “I want to have a better relationship.” Say, “I’m going to become a millionaire in X years. Here’s what I’m going to do to get myself there, a timeline of when it all needs to happen, the people I’m going to work with, details on how I’ll track results…”  Defining your goals might take more time upfront, but it’ll make accomplishing them so much easier because you’ve provided yourself with a concrete roadmap instead of an obscure thought.

It’s also important to think big. Most of us don’t think big enough, often opting to keep our blinders on instead. You’ve absolutely gotta get them off and widen your focus if you want to succeed.

You are not a horse running around a loop in the Kentucky Derby – you are a multi-faceted human being who is more than capable of accomplishing what you want and paving your own unique way to the finish line.

Once upon a time, Kyle McDonald had a paperclip. He wanted to trade it for something better, and so he decided to make a post on Craigslist. Not long after, somebody offered to trade him a pen. It wasn’t a particularly special pen – just a regular old ballpoint. But it was better than a paperclip, and so Kyle accepted. He continued to trade up, received better and better items, and eventually, he was able to trade for a three-bedroom house.

Sometimes, we look at the paperclip, and we say, “This is me. This is my life. This is all I have.”

Let me ask you a question: What would you do if you knew, without a doubt, that you couldn’t fail? Would you follow your dreams?

What’s really stopping you from following your dreams right now? If it doesn’t work out, who cares? Learn from your mistakes and try again. All the great people in the world have failed at some point in their lives. What measures success is our ability to pick ourselves up in the face of defeat and keep going.

Give yourself permission to try, fail, and try again. Surround yourself with people that believe in you and will support and motivate you along your journey. You’ll be surprised at how much you’re able to accomplish if you simply take the first step.

Take out a piece of paper right now and write down the names of five people who believe in you. Pick up the phone and talk to them about your goals. Ask them if they are willing to support and encourage you. Doing so will help you stay focused and actually take the action you need to take to turn your dreams into a reality. It’s important to hold yourself accountable, of course, but there’s no shame in asking for a helping hand.

Oprah once said that one of the best things she ever did was surround herself with friends. Instead of having people ask her why she was doing what she did and try to bring her down, she had trusted advisors push her towards her goals by asking her, “Why not? Why not do it? Why not YOU?”

Whether they’re positive or negative, attitudes become contagious. Which one would you prefer to have? Sit with that for a moment.

Now, take out the same piece of paper and write down five things you’ve been procrastinating on, whether they’re novel New Year’s resolutions or leftover runoff from last year’s missed accomplishments. Are you procrastinating on starting an exercise routine or getting rid of a bad habit? Have you made the amends you need to make, or are they still sitting there hanging over your head?

You’re almost two weeks into the new year. It’s time to take action and stop procrastinating. Let’s get that mind working so the body can follow.

Remember: You’re the only one who can do it for you.

Last week, we talked about what was important to you. Today, we’re writing our goals on paper.

Next week, we’ll start putting together a plan of action, so be sure to tune into Tuesday with Terry if you want to learn more about how to build the life of your dreams.